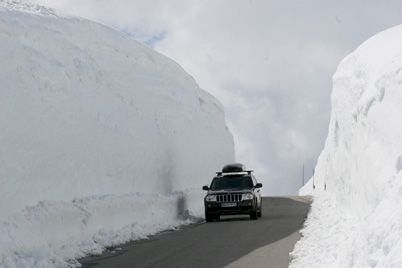 Norway almost became the end of our journey. The car was heavily pulled (like iron to a magnet) towards the exit road to Hell when we passed. It was very dramatic and we could feel the heat, but we managed to escape in some way. Don’t know what we have done, but it felt like the devil was ready for us&

The common word for our Sweden/Norway visit was RAIN. It was almost non stop
rain from the time we entered southern Sweden and until we left Norway. We
decided to change our route and not go north through Norway. Instead did we
drive non stop from Malmo to Riksgransen (a xxxxxx km drive) to make it for
the final day of the Nordic Freeride Skiing Championship. This just to
discover that the final day was cancelled due to bad weather. No skiing for
us, but we had the opportunity to catch up with a lot of friends who was
there.

We quickly moved over to Norway for skiing at first Narvik and Lofoten.
Skiing, not a chance& It was raining and the weather forecast showed
more rain for a week.

We made a quick decision to move south to hopefully get some better weather
and skiing in first Stryn and then Turtagro. Driving through Norway is
beautiful and spectacular, but it takes time since the roads are winding,
narrow and in pretty bad shape.

Not only the weather was against us. We tried to drive the very scenic route “Trollstigen”,
but it was of course closed. We did not even see any trolls, despite the
road warning signs for trolls…

We arrived in Stryn just in time for the summer season bar opening at the
Folven camping. Some Swedish friends are running the bar during the summer
month and they were also kind enough to let us stay in their house. No
skiing and waiting for bad weather to disappear often means; DVD movies,
sleeping, reading and playing games. That’s what we did for two days.

On day three it looked like it could be OK and we did an attempt to go skiing
in Stryn. The ski area were actually closed, but it was arranged for us to
go there anyway. The road to the ski area was “cut” through the huge amount
of snow and it was not yet open all the way up to the ski area. We got
picked up by a snow cat and it took us all the way up on the mountain. The
upper part of the mountain was pretty OK, but the lower part had very wet
snow and it was impossible to ski in it. This and the fact that bad weather
again appeared made us stop the skiing.

Two runs were all we got out of Sweden/Norway and this all due to the bad
weather. Nothing we can do about it and “you can’t win them all”.

We’ll now be heading home to Chamonix for some late spring glacier skiing
before we fly to Australia on June 7.

By the way: Do you know that Norway has the longest coastline in the world, 20
000 km (half way around the world)?