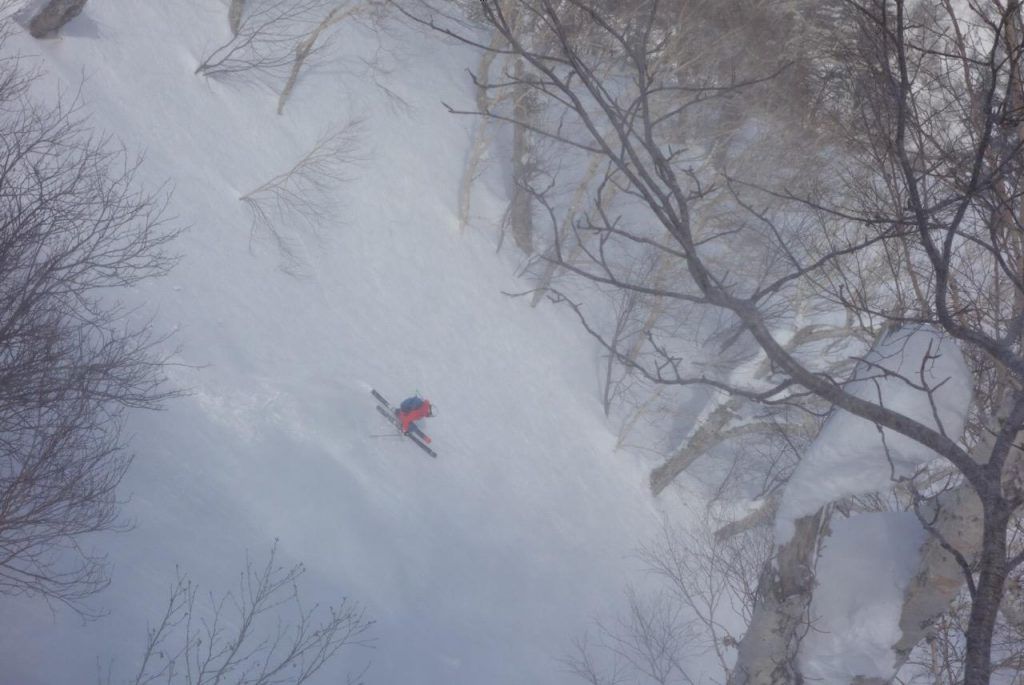 When I first heard about the mythical island of Rishiri, off the northern coast of Hokkaido, the northern island of Japan, it sounded too good to be true.   A massive mountain on a circular island in the middle of the ocean with no chairlifts–all backcountry.  I started looking a bit more into it, and the more I learned, the more fascinated I was, but also the more dubious.  Stian Hagen had been there the previous year and had basically been shut out from skiing altogether due to wind and nasty weather.  But he had surfed while he was there, a small consolation.  He said the potential skiing there was so insane and looking at pictures online I had to agree- that taking the risk to travel all the way there in hopes of decent weather was worth the risk.

So, not knowing what to expect, I packed my wetsuit, alpine ski boots, backcountry touring gear, and mountaineering equipment.  I crossed my fingers and began the long journey.

Getting to Rishiri required many flights, a very confusing train experience, a bewildering night in a town called Wakkanai where less English was spoken than remote villages I’ve been to in China (but luckily someone at the grocery store pointed us in the direction of a delicious ramen shop for dinner), and then a gorgeous ferry ride.

We arrived mid-day and met Toshi, proprietor of Rera Mosir Pension, who was eager to take us out skiing.  Despite our utter lack of Japanese and his very minimal English, it was very easy to communicate with Toshi and his sister and family.  They smile huge, gesture well, and rely on a hilarious translation app on Toshi’s phone where he speaks into the phone in Japanese and a minute later, out comes usually a poetic Japanglish phrase that gets the point across.

Rishiri mountain rises almost directly out of the ocean, offering 360 degrees of unlimited potential lines, all whose valleys and ridges end in mellow treed slopes.  We got a few laps in some mellow trees and great snow before calling it a day and meeting the rest of the crew who was just arriving.  The team consisted of badass Volkl skiers Stian Hagen, Christina Lusti, and Austin Ross; plus photographer Adam Clark and filmer Fred Arne Weglund.

Toshi and the Watanabe family are great cooks and hosts, and we ate incredible home-cooked Japanese food for breakfast and dinner every day, including roll-your-own sushi with the freshest of fish (“this is how we actually do it at home in Japan,” they told us) and amazing soups.

The rest of the time, when we weren’t eating food or relaxing in the private outdoor onsen in the evenings, we either drove around the island to get to skiing or surfing or ramen, or we skied.  Mostly, we hiked and skied.  Toshi would usually give us a snowmobile assist to cover the long, flat approach, and we would venture out on our own after that.  Each day, depending on what the wind was doing, he would point us in the direction of what he felt would be the best snow, and he was bang on.  Massive, spiny ridges flanked huge valleys, with chutes on either side or large, windswept rocky faces.  We found pockets of good snow, but the relentless wind was like nothing else I’ve every experienced.  It was fairly steady, at least, so when hiking on ridges, we just became accustomed to leaning heavily into the wind.  As long as you stayed in that position and always stayed over-layered, it became enjoyable sinking into your hood and your own thoughts.  Conversations while hiking in this wind were nearly impossible.

We skied on three different sides of the island over the course of one week, one day summiting the 2000m peak just because it was there and, though windy, the weather was not prohibitively bad.  We gave up on hoping for powder and enthusiastically embraced the adventure skiing–on the right equipment, any skiing is fun.  Everyone on the team loves a good challenge and almost enjoys the hiking up as much as the down, which made for happy days.  We found chutes, trees, and cruised down valleys back to the guesthouse every evening.  Surrounded by nothing but snowy ridges, ocean, and a few friends, adventuring all day and exploring this “floating mountain” as Toshi called it, made for one of the most fascinating and enjoyable trips I’ve ever taken.